The Economic Freedom Fighters (Ndlambe Subregion) strongly condemns the quiescence of Ndlambe Municipality in relation to the two incidents of rape committed by two of their employees. The municipality which prides itself as a caring municipality had an obligation to set the record straight on the first incident, instead it chose to remain silent thus becoming an accomplice to the crime committed.

Quiescence in an abnormal situation equates to a condonation of the very act which was committed and in this instance, the act is the brutal rape of a child. These two incidents are not isolated when one considers the war waged against women in this country. Instead, they are an extension of the continued objectification, dehumanization and brutal violation of women by men.

We are yet to reach a point where women are not perceived as sexual objects for the pleasure of men but instead, as equal human beings who enjoy the same rights as men, if not more. We reiterate our position as the EFF that we stand against cowardly men who violate and sexually abuse women.

The EFF to Ndlambe Municipality are taking a stand on the following matters:

1. The two perpetrators of rape, who are municipal employees, are suspended with immediate effect pending the exhaustion of court proceedings.

2. The municipality together with the South African Police Services plays an active role in ensuring that all sector departments including the Department of Social Development are of assistance to rape victims.

3. The municipality releases a statement condemning the two incidents and additionally, distancing itself from the acts of the two employees as soon as possible. Lastly, the EFF extends an invitation to all those who are against Gender Based Violence against Women and children to participate in a mass action outside court which is meant to cement our dissatisfaction and condemnation of the acts committed by these heartless and cowardly men.

Mass action is being organised to take place at 08h00 at the Port Alfred Magistrate’s Court on July 9.

The EFF released a statement saying that the community needs to stand firmly against those who continue to sexually abuse and violate women and children. 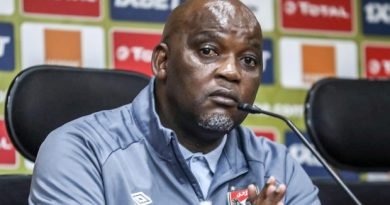 Bafana Bafana searching for a new coach after Ntseki sacked!